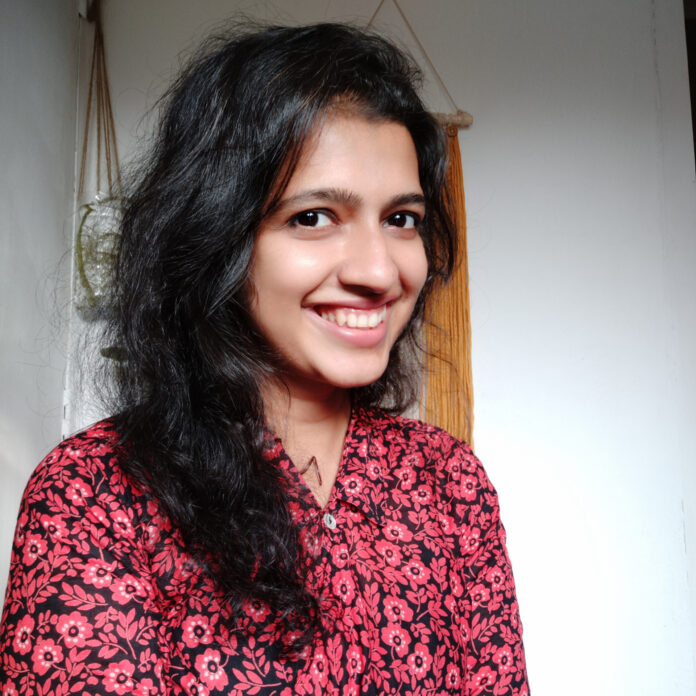 A dentist and an artist by profession, Shruthi runs a small sustainable home-based Macramé and fibre art business called Soulfullymade_crafts. She is a vegan activist and an animal rescuer, who practices zero waste and eco-friendly way of living.

In a conversation with ‘The Vegan Indians’, Shruthi informed that there were several reasons that led her to adopt veganism; the biggest being her dog. “I knew about the Yulin dog festival in China where they eat dog meat. I was reading about the post and how animal activists are trying to stop it. I felt happy that my dog is in India and is not going to suffer. But then I realised that even though we are not killing dogs here, we are exploiting cows for their milk. If I think it’s okay to snatch away a cow’s baby to get its mother’s milk, then someone could say that it’s okay to drink dog’s milk and snatch my dog away. To me, my dog is my child and this one thought just shook me to the core.”

“It made me realise that despite being an animal lover, I was contributing to cruelty towards them by consuming their milk. Also, I used to think that it is okay to drink milk once in a while. But later I realised that I need to quit it fully because I can’t say that it’s okay to hurt animals once in a while.”

Just like other vegans, Shruthi too found the journey a little difficult. “Frankly speaking, I don’t know exactly when I turned vegan. I won’t deny that I did slip sometimes . I started by quitting dairy products including tea and milk. But cheese was something which stopped me from being completely vegan.”

In 2012, Shruthi quit all cosmetics which were either tested on animals or had animal fats. Around the same time, she came across the term ‘vegan’. This was the beginning of her cruelty-free journey. “I was not influenced by anybody regarding veganism and wasn’t aware of the term. While purchasing cruelty-free cosmetic products, I got to know that they are vegan and this is how I learnt this new term.”

Shruthi started considering veganism at the end of 2017. It was difficult for her because she grew up in a family where ghee and milk formed an important part of the diet. “I didn’t know that ghee would be there in so many things. Back then, my mom used to cook for me and I was busy with my masters, so I was less aware of my food. There were a few instances where I accidentally ate a dish which had ghee. But from 2018, ever since I started cooking for myself, I have been a complete vegan.”

Shruthi suffered from terrible migraines before going vegan and took medicines for years. “My migraines and headaches were very severe. Over the last two years, I have stopped taking medicine, and I had had just one migraine attack. I know that it might come back but the frequency is low now. Before that, even the slightest of stress could trigger a migraine attack.” Dairy and migraine have been associated closely, according to several studies.

Besides migraine, Shruthi also got a relief in her stomach issues after going vegan. “I had severe constipation and used to have a lot of stool issues. Nobody told me that it was because of heavy milk consumption in my case. I used to eat a lot of vegetables for fibres but it wasn’t helping much.”

Shruthi told us, “I didn’t stop dairy for health concerns; I stopped only for animals and their suffering. However, once I turned vegan, I slowly observed the improvement in my health too. Then I started researching about it and got to know about all this. As a doctor who loves to research, I always end up spending late nights reading about how animal products, including meat and dairy, were the leading cause of smaller health issues such as acne and constipation to major ones like cancer. That urged me to adopt and promote vegan lifestyle.”

Many of Indian food habit are vegan by default. However, Indians find it difficult to give up dairy. Shruthi is of the opinion, “Making the switch isn’t easy considering how society and family play a major role in every decision we take. But it’s not impossible either! If the individual is strong headed and turns vegan, then I am sure people around him or her will slowly understand the concept and I am sure will consider vegan options and lifestyle.”

“To anyone who wants to go vegan or who is vegan – always remember – going vegan is not the important part, staying vegan is! When things get rough, always remember your WHY power – the reason WHY you went vegan and WHY you chose this journey. When you reflect and know why you started this journey, it becomes much easier.”

Shruthi advises aspiring vegans to take it slow as it’s a way of life and not a competition. “Set a time limit or go vegan overnight. Slowly start by eliminating one product after another.”

Giving a message to her readers and followers, Shruthi said, “Let’s choose this path of compassion, kindness and love. We are all filled with compassion. While growing up, we were conditioned to believe that it’s okay to consider an animal as food and another as a companion. But deep down none of us would want to induce suffering in another living being. Therefore, we must reconnect with our true selves and choose the path of compassion to not only save the animals but also our Earth and our health.”