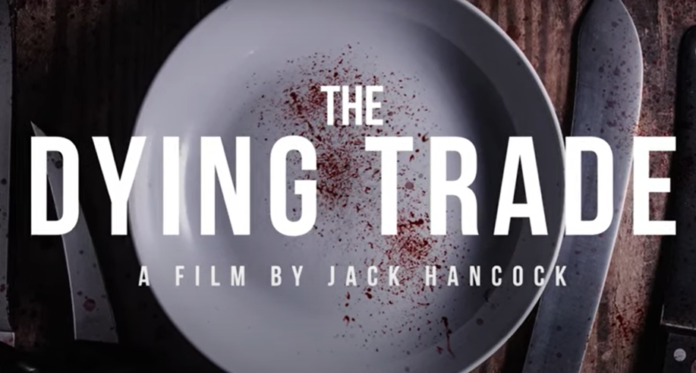 One of the often-neglected aspects of the slaughterhouse industry is the condition of workers involved in such work. It is a job that is not only immensely cruel to animals but also to millions of people who end up having physiological and psychological effects of working in such an industry.

To bring attention to this problem, Jack Hancock-Fairs, a vegan activist and son of a slaughterhouse worker, is working on a documentary exploring the impact of such work on the well-being of workers in the industry. The project – The Dying Trade – aims to expose the industry’s cruel treatment of animals by the voices of the very people who have seen it with their own eyes and participated in it with their own hands.

In the film’s trailer, some kids are shown talking about what they want to become when they grow up. While most kids aspire to take up regular professions, the protagonist, an adult who keeps having nightmares about slaughtering animals says, “When I grow up, I want to be a slaughterhouse worker.” The video also shows the link between alcohol abuse and slaughterhouse work.

“The suffering experienced within slaughterhouses is huge in scale and clearly neglected. I really hope this film can open people’s eyes to the animal cruelty and poor worker treatment that exists within the walls of slaughterhouses all over the world,” Jack says.

“By raising awareness about these issues, we can help lay the groundwork for future progress.”

Jack currently runs a YouTube channel ‘Humane Hancock’ in which he highlights animal suffering. He has been part of the vegan community, and often takes to street activism to promote the cause of veganism. “I’m motivated to do these things because I want to reduce suffering in the world,” he says.

Surprisingly, Jack belongs to a family of slaughterhouse workers with several of his family members working in the meat industry since generations. His father is still a slaughterhouse worker, and his great-grandfather owned a shop called the ‘Hancock Family Butcher’. Even his great-grandfather’s brothers owned butcher shops. He says working in the meat industry became “a bit of a family tradition.”

He asks, “Who are the people confronting the very thing that most of us are so disconnected from? Who are the people witnessing animal slaughter every day as part of their day job? What is it like to work in slaughter and how does it affect you psychologically?”

According to Jack, the project is important not only to expose animal suffering but also because it will bring to light the inhumane treatment of slaughterhouse workers. “After meeting with some of these people, it’s clear that the continuous participation in animal slaughter can seriously affect a person’s mental health and psychological wellbeing,” he observes.

Jack is currently looking for funds to finance his campaign that will raise awareness about some of the most neglected issues of our time. If you wish to support his project, click here