Bollywood actor Anushka Sharma and cricketer Virat Kohli chose a vegan restaurant to enjoy a quiet meal after the latter’s match at Lord’s last week in which Team India beat England and took a 1-0 lead in the five match series.

The duo went for a lunch date at Tendril Kitchen, a restaurant in London’s Soho area specialising in vegan food. A picture of the couple with Chef Rishim Sachdeva was shared by the restaurant on their social media page.

A post shared by A (mostly) vegan kitchen (@tendril_kitchen)

Anushka also shared stories of the fare on her Instagram. 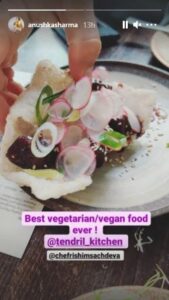 The actor embraced a vegetarian lifestyle in 2015. The same year she was named ‘PETA India’s Hottest Vegetarian Celebrity’. She has openly spoken against horse-pull carriages, protecting dogs from fireworks and rescuing animals, which won her the PETA’s ‘Person of the Year’ in 2017.

In 2018, a heartbreaking image of an elephant being violently beaten by numerous men was highlighted by PETA. Shocked by the brutality, the actor took to Twitter to voice her opinion and raise concern about the same. She signed the petition to end elephant joyrides in Jaipur to spare these innocent beings, from all human-inflicted cruelty.

Can you imagine the world we live in ? Hurting a voiceless being that is being used to carry humans around for nothing all day !! Shame shame shame on these ‘humans’. Aches my heart to see such brutality by my own kind ! Sickening ! pic.twitter.com/2t13KEug1d

Same year, she also collaborated with PETA India for a campaign promoting vegetarianism.

She often shares anecdotes and busts myths related to a vegetarian lifestyle.

Since I turned vegetarian, the question I’m asked the most is ‘Where do you get your protein from?’. The film, The Game Changers on Netflix is my answer to all those questions forever 😂 .

In 2019, her husband Virat Kohli also went the vegetarian way, publicly with this tweet.

Saw game changers on Netflix. Being a vegetarian athlete has made me realise what I have believed all these years regarding diet was a myth. What an amazing documentary and yes I’ve never felt better in my life after I turned vegetarian.

Together, they also shared plans of opening an animal shelter.

A whole bevy of B-town celebs had embraced vegetarianism in lockdown including, Bhumi Pednekar, Shilpa Shetty Kundra, and Akshay Kumar.

Actors Riteish Deshmukh, Genelia Deshmukh, Vidyut Jammwal, Shraddha Kapoor, Shahid Kapoor, Vidya Balan, and Sonam Kapoor have been following a vegetarian/vegan lifestyle for a while and are often found talking about its benefits on their individual social media feeds.

Some actors such as Uday Chopra, Sunny Leone and Jacqueline Fernandez have embraced veganism, while others keep experimenting. We hope more celebs travel the last mile and turn vegan soon.