Expedia, one of the world’s top travel companies, has announced that it will no longer offer holiday packages that include performances by dolphins and other cetaceans.

Making the announcement on Twitter, the US-based company said, “We recently adjusted our animal welfare policy. As a result, attractions and activities that involve performances by or interactions with dolphins and other cetaceans will no longer be available on our sites.”

The Expedia website states, “seaside sanctuaries that provide captive animals with a permanent seaside living environment are allowed if they are accredited and do not feature interactions or performances”.

It said that it will take time to implement the new policy, and intends to complete the process by early 2022.

The company has also stated it does not “allow intentional physical contact with wild and exotic animals, which include but are not limited to dolphins, whales, cetaceans, elephants, big cats, bears, reptiles and primates”, and also does not sell activities involving exotic pet cafes, restaurants and travelling zoos. 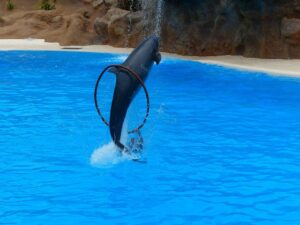 This move by Expedia follows a similar announcement by Virgin Holidays in 2019. Other companies, including Tripadvisor and Southwest Airlines, have also stopped selling tickets to SeaWorld and other places that keep whales and dolphins captive.

Why are Dolphin Shows Cruel?

By visiting shows that involve performances by dolphins, tourists unwittingly contribute to a cruel industry. Dolphins, who are intelligent and sensitive animals, are confined to barren tanks or makeshift lagoons, with no choice but to swim in endless circles. Some suffer from ulcers and other health ailments, and many die prematurely because of the stressful conditions of extreme captivity.

SeaWorld, which is one of the best known tourist attractions in the US, abducts and breeds marine mammals and subjects them to a lifetime of deprivation, according to PETA. More than 40 orcas have died at SeaWorld, and not one has come close to the maximum life expectancy of the species in nature. Other dolphins are still being forcibly bred, sometimes after being drugged, and forced to perform meaningless tricks.

Orcas, other dolphins, and every animal at SeaWorld deserves a life free from exploitation for tourism and entertainment.