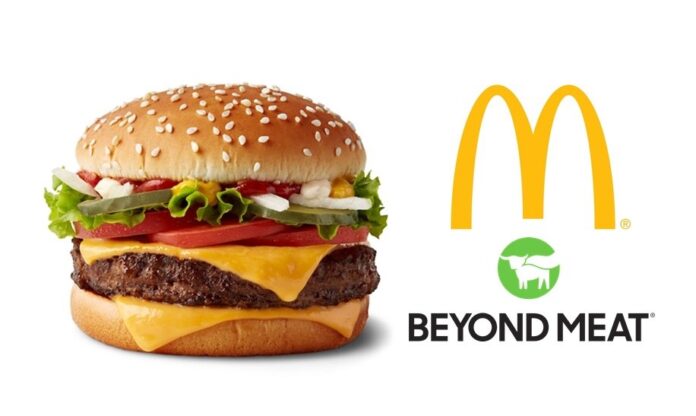 Customers in the UK and Ireland will now be able to enjoy the much-awaited McPlant vegan burger.

Making its foray into the vegan burger market, McDonald’s is going to roll out McPlant in the United Kingdom and Ireland by the end of this month.

Developed in partnership with plant-based meat company Beyond Meat, the burger was showcased at an exclusive tasting event at the company’s London headquarters.

On 29 September, McPlant will see a trial launch in 10 select restaurants in Coventry, and mid-October onwards, the launch will be extended to more than 250 outlets.

According to McDonald’s, it is targeting nationwide roll out in 2022.

The company said its first ever plant-based burger “delivers the same great taste and experience you would expect from a McDonald’s burger”.

The launch comes after three years of research and development by McDonalds to arrive at a vegan alternative in collaboration with Beyond Meat. The two companies had announced in February this year they have entered into a three-year global strategic partnership, aimed at developing new plant-based menu options through McDonald’s McPlant platform.

McPlant was tested in European markets, including Sweden and Denmark earlier this year. It was also launched in Austria, where it targeted the flexitarian population, since it was served with dairy cheese and traditional mayonnaise.

However, the version launched now is 100% vegan. The cheese used in the burger is made using pea-protein, tested to match the taste of the chain’s regular cheese slices. Fully accredited as vegan by the Vegetarian Society, the burger comes with vegan sauce instead of the regular egg-based mayonnaise.

McDonald’s UK and Ireland chief marketing officer Michelle Graham-Clare said: “We’re so pleased to be finally launching McPlant in the UK and Ireland. As with every McDonald’s offering, we take our time to ensure it meets the highest standards and is something that all our customers will enjoy.”

“We are always looking for different ways to innovate and meet our customers’ needs, and with McPlant we have a delicious plant-based burger that will appeal to everyone. Whether you’re vegan or just fancy a plant-based patty, we’re confident you will enjoy the McPlant.”

Robbie Lockie, the co-founder of Plant Based News, who was at the tasting event, said the burger was “absolutely delicious”, and, that it “tasted exactly like a traditional Big Mac burger in all the ways that most people are used to expecting”.

McDonald’s rival Burger King is already offering plant-based options, with its Impossible Whopper selling at over 7,000 locations across the United States.