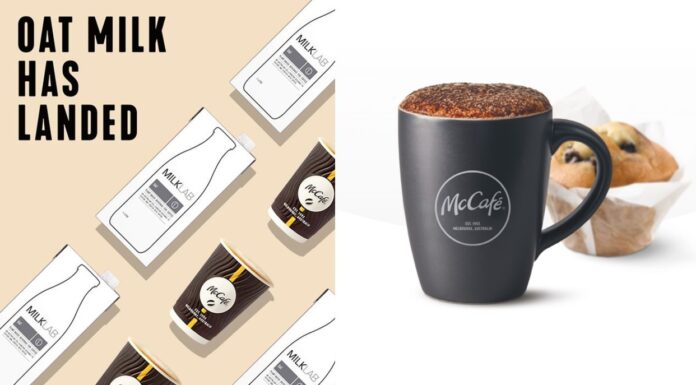 McDonald’s Australia has partnered with the country’s popular plant-based dairy brand ‘Milklab’ to introduce oat milk in its McCafé menu.

The new non-dairy milk option will be available for all its offerings, but will come at a surcharge – a move which often comes under criticism.

The announcement was recently made by McDonald’s on its social media handles in a post that read: “Together, at last. MILKLAB Oat Milk has officially joined the McCafé line-up.”

McDonald’s Australia already offers vegan dairy options such as almond and soy milk, but oat milk was something that McCafé customers had been demanding for a long time.

Why is oat milk getting so much attention?

Today, there are multiple options available in plant-based beverages but oat milk is becoming dominant because of its allergen-free nature. It is slowly becoming a beverage of choice for consumers around the world because it can somewhat replicate the taste and texture of dairy milk, besides being healthier than its other plant-based counterparts. Another important feature that makes oat milk popular is its ability to foam like dairy milk, making it suitable as a creamer in coffee.

One more factor working in favour of oat milk is the sustainability of production. Oat milk production requires the lowest amount of water and has the least environmental impact when compared to other plant-based milk variants. A life cycle assessment study by Oatly showed that oat milk production leads to 80% lower greenhouse gas emissions, requires 60% less energy and 80% less land as compared to dairy milk.

These factors have led to a significant growth of the oat milk market across the world. According to a recent report by Allied Market Research, the global oat milk market garnered $360.5 million in 2019 and is projected to generate $995.3 million by 2027, witnessing a CAGR of 13.4% from 2021 to 2027.

At present, global oat milk market is made up of a few major players such as Oatly, Califia Farms, Linda McCartney Foods, and Coca Cola, while several others are eyeing this segment and planning to roll out their products in coming years.