Towards the end of June, Canada and the United States experienced extreme temperatures due to ‘heat dome’, a phenomenon in which strong high pressure builds up, compressing the air and heating it up.

The intense heat waves affected the Pacific Northwest, with temperatures rising up to 50 degrees celsius along the shoreline. The high temperatures not just killed hundreds of people and triggered wildfires, but also had a catastrophic impact on marine life.

Chris Harley, a marine biologist at the University of British Columbia, said that over one billion sea animals have died to the heat wave in Vancouver. He told CBC how he was stunned to see thousands of mussels lying on the beach with their shells open, indicating they died due to intense heat.

The record-breaking heatwave killed mussels who were washed ashore by the tides. “A mussel on the shore in some ways is like a toddler left in a car on a hot day. They are stuck there until the parent comes back, or in this case, the tide comes back in, and there’s very little they can do. They’re at the mercy of the environment. And on Saturday, Sunday, Monday, during the heatwave, it just got so hot that the mussels, there was nothing they could do,” explained Harley.

Besides mussels, he also saw snails, sea stars and clams decaying in shallow waters, giving out an unbearable putrid smell, which Harley described as “an overpowering, visceral experience”.

His students also reported deaths of other sea creatures such as sea anemones, rock fish and oysters.

Although such heat waves are ‘exceptionally rare’, Harley admits that with climate change, this could become a regular phenomenon occurring once every five to 10 years. “If it happens that frequently, the system won’t have time to recover in between the die-offs,” he said. 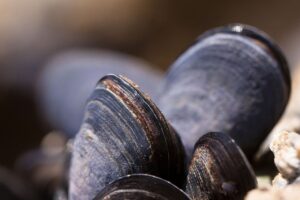 According to scientists, North Pacific Ocean, the Greenland Sea and the Barents Sea host the species that are most vulnerable to global warming. According to the International Union for Conservation of Nature (IUCN), “Increasing ocean temperatures affect marine species and ecosystems. Rising temperatures cause coral bleaching and the loss of breeding grounds for marine fishes and mammals.” This risk posed by climate change on the marine ecosystem, and eventually on humans, can be reduced by limiting global warming to no more than 1.5°C.

“f you’re losing a few hundred or a few thousand mussels for every major shoreline, that quickly scales up to a very, very large number. Eventually, we just won’t be able to sustain these populations of filter feeders on the shoreline to be anywhere near the extent that we’re used to,” concluded Harley.