Alexander McQueen, Balenciaga To Stop Using Fur in Their Collections

British luxury fashion house Alexander McQueen and Spanish designer Balenciaga have announced their fur-free policies, joining the long list of iconic brands that are part of French luxury conglomerate Kering. This move by the two renowned fashion brands is a result of the efforts of Humane Society International (HSI) and the Humane Society of the United States, who have been working with Kering to help them adopt a fur-free policy.

The announcement was made in Kering’s 2020 Universal Registration document, which says, “Most of the Group’s Houses do not use fur. For example, Gucci is part of the Fur Free Retailer program promoted by NGO Fur Free Alliance, and has banned the use of furs across its entire range since its Spring/Summer 2018 collections. Gucci is also committed to no longer using angora. Balenciaga, Alexander McQueen and MCQ also no longer use fur in their collections.”

Leading brands such as Gucci, Prada, Versace, Michael Kors, Armani, Jimmy Choo, Burberry, DKNY, and Chanel have also stopped using fur in their products. According to HIS, only Kering’s Saint Laurent and Brioni have yet to announce fur-free policies.

On Wednesday, American luxury department store chain Saks Fifth Avenue also announced it has committed to stop selling products made using animal fur through a phased approach by the end of fiscal 2022. The company has made the decision citing “customer preferences” and “societal shifts”. “We recognize that trends constantly evolve, and that the sale of fur remains a significant social issue. As such, eliminating it from our assortment is the right step for us to take at this time,” Tracy Margolies, Chief Merchandising Officer, Saks, said in a company statement. Saks Fifth Avenue plans to close all of its fur salons by the end of fiscal 2021. 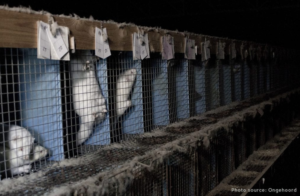 Humane Society International, PETA and several other animal rights organisations around the world have been campaigning for a long time to put an end to fur farming. They have formed ‘The Fur-Free Alliance’, which is an international coalition of more than 50 animal protection organisations. With an ever-increasing consumer preference for fur-free products, brands that have long stuck to using this material in their collections, are slowly making a transition. Far from being sustainable, fur is also a product of extreme cruelty. Several countries in Europe, including Austria, the U.K., Belgium, Luxembourg, Croatia, Czech Republic, Slovenia, Bosnia and Herzegovina, Serbia and Macedonia have banned fur farming. Netherlands and Norway too will join the list by 2024 and 2025, respectively, while France will shut down its fur farms by 2025.