Consumers around the world are driving innovation in the food systems as demand for more sustainable food sources continues to rise. With the global population expected to reach 9.7 billion by 2050, the consumption of protein is likely to go up significantly. People in the developing countries of Asia and Africa will also start consuming more meat in the coming years due to an increase in disposable incomes.

Revealing its estimates on the subject, EY (Ernst & Young) says that alternative protein penetration of the global meat market by volume will climb from <1% in 2020 to between 5% and 10% in 2030, and potentially much higher over the following decades.

Today, over three-quarters of global agricultural land is used for livestock production, which only supplies one-fifth of the world’s calories. The current food production systems are also taking a toll on the planet, accounting for more than a quarter of global greenhouse gas emissions; more than half of which comes from livestock and fish production.

EY Food and Agriculture practice estimates the total alternative protein market will stand between US$77 billion and US$153 billion by 2030, up from between US$5 billion and US$10 billion in 2021. It also highlights that the conventional protein market is currently growing at about 2.4% per year, while alternative proteins are estimated to grow at more than 36% per year. 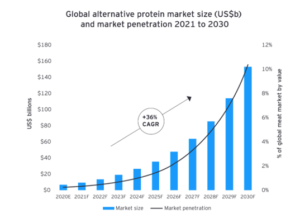 The estimates present a bright road ahead for the alternative protein segment, and show how agriculture’s environmental footprint, particularly its greenhouse gas footprint is likely to decrease over the coming years. Total livestock emissions are estimated at 7.1 gigatonnes of CO2-equivalent per year, approximately 14.5% of all anthropogenic GHG emissions, of which beef cattle comprise 65%. A transition toward plant-based and cultivated proteins will shift crop patterns, require less land, and reduce the overall environmental impact.

The study also talks about how the alternative protein segment comprising, plant-based, fermentation and cell-based products, will also make food chains more robust and resilient in periods of disruption. Manufacturers in alternative protein space will be able to alter their production more rapidly than conventional protein producers to meet rapid shifts in consumer demand or unexpected disruptions, such as those caused by pandemics.

Alternative protein market is advancing rapidly and its disruption potential is growing. EY mentions the below recent disruptive market signals:

3) Regulatory approvals on novel ingredients, production processes and products, such as the approved sale of cultivated products in Singapore in November 2020