Students from University College London, King’s College London, and London Metropolitan University dropped banners reading “Meat & Dairy = Climate Crisis” at important university buildings. They are campaigning for their universities to transition to 100% just and sustainable plant-based catering in cafes and restaurants by the 2023-24 academic year.

They unfurled large banners and let off non-toxic smoke flares at key university locations to make universities recognise and act on the catastrophic climate impacts of industries like meat, dairy, and fishing.

The banners dropped at UCL’s Gower Street Main Campus, KCL’s Bush House, and London Metropolitan’s Holloway Campus Library, are a clear message to these institutions from their students. The message is that students will not allow their universities to stand by and be complicit in the ongoing collapse of the climate, destruction of human and animal life, and destruction of their futures.

Sofia Carolina Fernandes Pontes, 25, student at London Metropolitan has said “It’s simple, universities have to act on the climate crisis and that begins with their menus. We know that industries like meat, fish, and dairy are driving climate collapse, deforestation, and ocean dead zones. This is all whilst we produce enough to feed ten billion people, yet have hundreds of millions starving all over the world because of our woefully immoral food systems. Universities must transition to fully just and sustainable plant-based catering by the 2023-24 academic year in order to secure a liveable world for the students they are educating.” 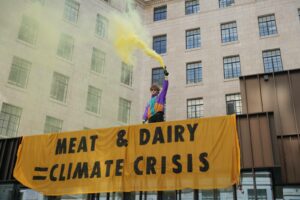 The Plant-Based Universities campaign which is active at 20+ universities across the UK aims to hold universities to account for their role in the climate crisis. As places where vast amounts of knowledge is produced, they are the institutions most aware of the changes that need to be made. One of those is undoubtedly a just and sustainable transition to fully plant-based cafes and restaurants.

Since all the universities hint at plant-based options being sustainable and desirable, why are they not adopting them? In order to bring this issue into greater focus and attention within universities the student campaigners have taken nonviolent direct action. The campaigners are taking this action in solidarity with all those over the world participating in the global student strike.

Dev Vyas, 19, student at UCL tells us “Universities have a duty of care to their students. By continuing to ignore their own studies about how unsustainable meat, fishing, and dairy industries are, they are burying their heads in the sand on this. We, students from a massive variety of backgrounds, experiences, and studies, refuse to stand by and watch our universities commit climate, social, and animal injustices. Today thousands of young people are striking for climate change and we fight alongside them for justice worldwide.”