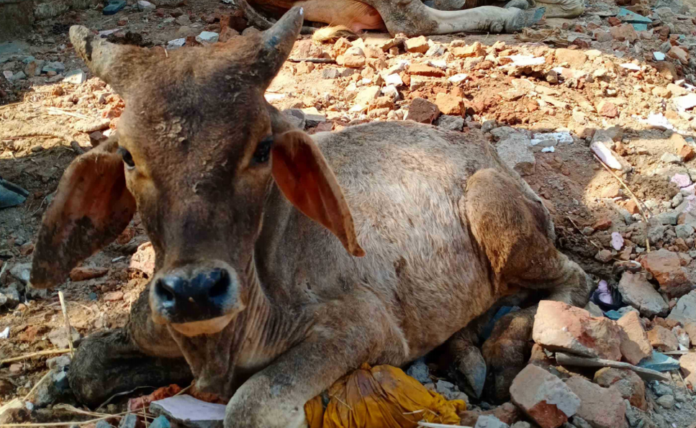 An investigation conducted by the Federation of Indian Animal Protection Organisations (FIAPO) has exposed the ill-treatment meted out to milch animals in Gujarat, the state which was instrumental in initiating the White Revolution in the country. The report threw light on various dairy malpractices by conducting a survey in 29 dairy farms in three districts of Gujarat, namely, Surat, Ahmedabad and Vadodara. The investigation report highlighted poor body condition, emaciation, abandoning of male calves after birth, short lifespan, filthy and unhygienic premises, tying of hind legs, amongst others.

Gujarat is amongst India’s highest milk-producing states contributing more than 14 million tones, which accounted for 7.7% of the total production in 2018-19. Although there are several national laws and guidelines on cattle welfare, the dairy owners often flout these norms in order to increase milk production to meet the exponential growth in demand for dairy products, which FIAPO says “often itself created through advertising.”

While a cow’s natural lifespan is about 20-25 years, the dairy animals have their lives cut short due to constant exploitation in the form of back to back pregnancies (which are often a result of artificial insemination), and lactation. This is exacerbated by the mental stress that a dairy animal suffers due to the separation of their calves after birth. The report revealed that 83% of the calves in these dairy farms did not get a chance to drink their mother’s milk. In order to stimulate milk production, farmers often used stuffed carcasses (khalbachcha) of calves to trick the mother into releasing milk. The male calves are abandoned after birth since they are of no use to the dairy farmers, and even the dairy animals suffer the same fate after they have stopped lactating. The FIAPO report says that male calves are abandoned in 66% of the farms.

The report also highlighted the unsanitary conditions in several farms. In 97.6% of the farms, the floor space was not adequate and 48.3% of the farms did not have a roof for the animals to take shelter, leaving them exposed to extreme weather conditions. The FIAPO report also said that 55.2% of the farms had concrete flooring, which is harmful for hooves of the animals, making them vulnerable to fractures and ulcers. Animals in 76% of the farms were tethered to a rope less than 3 feet long, restricting their normal body movements. Moreover, most of the farms had unsanitary conditions leading to diseases in farm animals. Regular cleaning of the living area is not undertaken and animals were forced to stand and sit in their own waste.

Besides these findings, the FAIPO report also highlights that the hind legs of animals were tied while being milked in around 79% of the farms. The body coat of these animals was dull and short, showing that no attention was paid to their health and well-being. Almost half of the farms investigated did not have a ready supply of feed and drinking water.

These cruel dairy farm practices are a result of commodification of these animals that are seen as milk-producing machines. Similar conditions are seen across all dairy farms in the country. With disposable incomes rising, people have started consuming a variety of dairy products that require a never-ending supply of milk. The increasing demand stems from the belief that milk and milk products are essential for good health, despite the fact that almost 65% of Indians are lactose-intolerance.