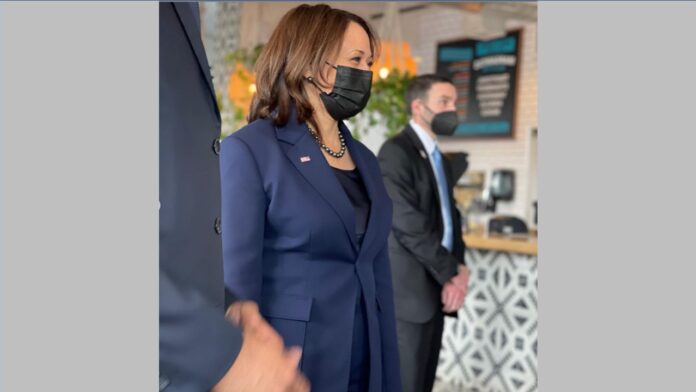 Now, this is one piece of news that is bound to excite vegans across the world.

Kamala Harris, the Vice-President of the United States, today made an unscheduled stop at a vegan taco eatery in Las Vegas, Nevada. She visited Tacotarian along with Second Gentleman of the US Doug Emhoff.

An update on the plant-based restaurant’s social media page, reads, “Sooo this happened today! You never wake up in the morning and think I wonder if the Vice President of the US will stop in and grab tacos today. But today that actually happened! We were just sitting there and someone came up and said “hey I’m from the White House and the Vice President is on her way here.”

Tacotarian thanked Harris for stopping by and said that the Vice President is “dabbling in veganism”.

“We’re excited to hear you’re dabbling in veganism (at least before 6PM) and we hope you continue on that journey. And, of course, thanks to Senator Cory Booker for always supporting us and giving the VP the recommendation. We’ve been so lucky in our journey thus far and we can’t wait to see what our future holds,” the restaurant added.

Reports say that she had ordered two super tacos, two carne asada tacos, and two mushroom tacos. The staff added some desserts for free, “in case Harris has a ‘sweet tooth”.

This incident has created a lot of buzz since it closely follows a recent petition launched by JIVINITI Women’s Coalition urging Harris to adopt a plant-based diet for January 2021. The petition called on Harris to take Million Dollar Vegan’s 31-day Vegan challenge in order to promote benefits of plant-based food amidst the pandemic. JIVINITI’s petition has received over 4,000 signatures till date.