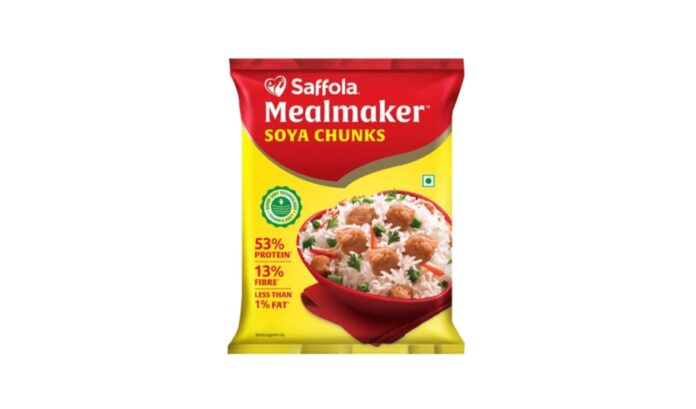 Marico, one of India’s leading FMCG companies, has announced its foray into the plant protein category with the launch of Saffola Mealmaker Soya Chunks. In line with its aim to strengthen its presence in the healthy foods segment, the company has introduced a differentiated product in the soya chunks segment.

Today, consumers are proactively seeking healthy and protein rich foods that can easily integrate into their daily routine. In addition, the need to boost one’s immunity has further accelerated consumers’ preference towards plant-based protein choices. As per a company release, Soya Chunks are one of the best vegetarian sources of protein and the new Saffola Mealmaker Soya Chunks provides 53 grams of protein for every 100 gram of product; it also has 13 percent fibre and less than 1 percent fat, making the product extremely healthy and nutritious.

Saffola Mealmaker Soya Chunks is made using a special Super Soft Technology which keeps the chunks juicy and tender. The soya chunks are extruded using strict process control to obtain chunks which cook softer, so that consumers can enjoy tender, juicy and tasty chunks, the company says.

Speaking on the launch, Sanjay Mishra, Chief Operating Officer – India Sales & Chief Executive Officer – New Business, Marico Limited, said, “Today people are increasing opting for a healthier lifestyle which in turn is fuelling a trend towards the inclusion of immunity boosting foods and higher levels of protein in our diet. Soya Chunks are a great source of vegetarian protein, high in fibre and low on fat. They are also very versatile and can be cooked in multiple ways to suit all taste. As per our research, some consumers have found existing products to be chewy and hard in texture and do not absorb any flavour easily. Keeping this in mind, we have introduced Saffola Mealmaker Soya Chunks using Super Soft Technology which makes the texture soft and spongy while absorbing all the flavours when cooked, keeping the nutritional value intact.”

“These newly launched Soya Chunks mark our entry into the plant protein category. We have emphasized our focus on taste, texture and nutrition while developing this differentiated product as we want to ensure that plant-based products such as Saffola Mealmaker Soya Chunks are tasty enough to become a regular part of consumers’ diets,” he added.

Saffola Mealmaker Soya Chunks comes in four pack sizes – 45 gram for Rs 10, 200 gram for Rs 45, 400 gram for Rs 89 and 1 kg for Rs 150. At present, it is available in West Bengal across general trade and will shortly be available across modern trade, on direct to consumer portal and on major e-commerce platforms.