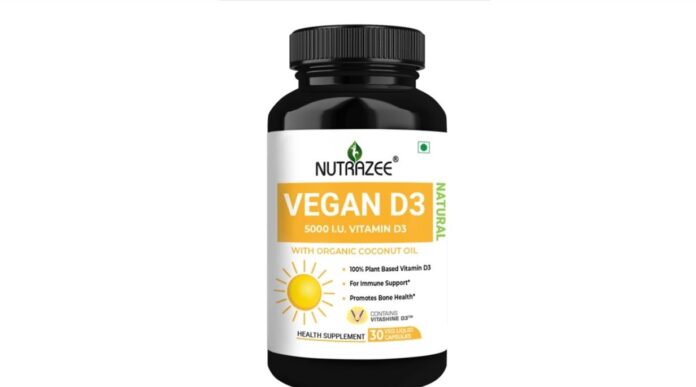 Hyderabad-based Nutrazee, a vegan dietary supplement brand, has introduced a plant-based Vitamin D3 supplement in India. The supplement comes in a liquid filled veg capsule, and contains Vitamin D3 derived from a plant source called Lichen. It is formulated with organic coconut oil instead of animal-derived oils to assist in the absorption of the vitamin. As per the company, the vitamin D3 used in Nutrazee’s capsule is the world’s first vegan society and vegetarian society registered Vitamin D3.

India has the world’s largest population of vegetarian people and over the last three years, India has seen unprecedented growth in the vegan lifestyle. Vitamin D supplements are of two types – ergocalciferol (vitamin D2) and cholecalciferol (vitamin D3). Cholecalciferol is the biologically more viable and active form of vitamin D. It is the form of vitamin D which our skin synthesizes when it absorbs rays of the sun.

Researchers reveal vitamin D3 to be substantially more effective than vitamin D2 or ergocalciferol, and the potency of vitamin D2 is less than one-third that of vitamin D3. Vitamin D3 in regular supplements is mostly synthetic that is made in labs, or animal-derived from Sheep’s Wool (lanolin). This leaves vegans and vegetarians with the option of inferior form of Vitamin D, that is, Vitamin D2.

Most people who take Vitamin D supplements on regular basis are unaware of the fact that almost all the Vitamin D supplements that they find in the market are either synthetic or derived from Lanolin. Also, most supplements are formulated in a gelatin-based soft gel with either fish oil or cod liver oil, rendering them unsuitable for people on a vegan or vegetarian diet.

Jagadish Jain, founder of Nutrazee said, “Although India has favourable climate throughout the year to get the natural source of Vitamin D from the sun, most studies have found that almost 80% Indians are deficient in Vitamin D, which can be attributed to poor diet and busy lifestyle. With various benefits of Vitamin D established by various studies and the recent reports of the UK government distributing Vitamin D pills for free being a testimony of the importance of this Vitamin, people across the world are making Vitamin D supplementation a part of their diet with India being no exception. With Nutrazee’s Vegan D3 you no longer have to supplement your diet with animal-derived Vitamin D.”

The company says that all their products are made with non-GMO ingredients, and are 100% vegan, lab tested, and manufactured in GMP certified world-class facilities. They are also free of artificial flavours, colours, soy, dairy, gluten, animal-derived ingredients, and common allergens.