The company, known for its patent-pending additive manufacturing technology, had been working on the salmon prototype after securing $2 million funding from TechAviv Founder Partners in early 2021.

Plantish is the first company to have successfully replicated the look, taste, texture, and structure of conventional salmon. Besides making the vegan fish look realistic, the company’s technology is also able to produce the alternative at low cost, enabling it to scale up manufacturing for mass market.

The boneless salmon fillet is made from legume proteins and algae extracts. 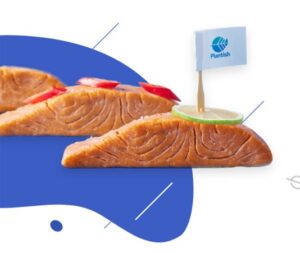 “There is so much you can do with a fillet of Plantish salmon. Grilled, baked, poached, oven roasted, or charred, Plantish salmon is fresh, delicious, and made of the best plants we could find,” the company says.

According to an article published on Plant Based News, Plantish’s salmon has the same nutritional profile as that of conventional salmon, while also being high in protein, omega-3s, omega-6s, and B vitamins.

It is also free from mercury, antibiotics, hormones, microplastics, and other toxins – found in most farmed or wild salmon.

Plantish salmon fillet is slated for commercial launch in 2024.

Ofek Ron, co-founder and CEO of Plantish, said, “We exist to save the oceans and eliminate the need to consume marine animals by providing more sustainable, more nutritious, and more delicious fish options.”

“Our vision is to be the world’s leading seafood brand, all without hurting a single fish.”

There is a pressing need for fish alternatives to combat the problem of overfishing existing today. As the global population moves towards the 10 billion mark by 2050, fishing industry as we know today will become even more unsustainable.