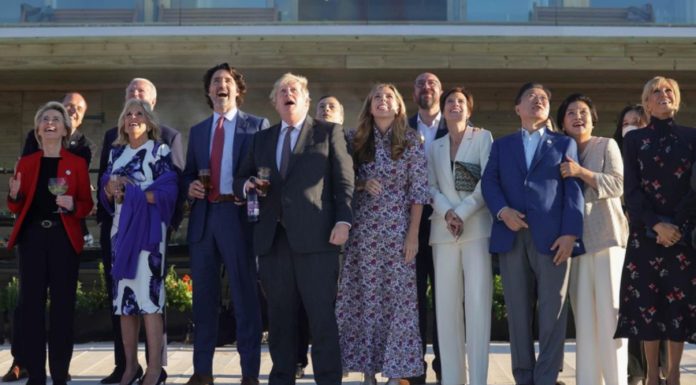 Government leaders from the Group of Seven (G7) are being criticised for having a ‘steak and lobster BBQ celebration’ amid discussions on reducing climate change.

This year’s gathering of world’s seven richest nations took place in Cornwall, UK, where the leaders decided to scale up their efforts towards tackling climate change and renewed a pledge to raise $100bn yearly to assist poor countries to meet their emission reduction targets.

The leaders said they would stop the funding of coal and coal-powered plants in other countries to curb CO2 emissions. They also committed to keep the global temperature rise to 1.5 degree Celsius limit.

However, their climate commitments seemed pointless considering that they feasted on meat – a major source of greenhouse gas emissions and marine pollution – while enjoying aerobatics show!

“But, the G7 leaders really seem to be having a good time presenting their empty climate commitments and repeating old unfulfilled promises. Of course, this calls for a steak-and-lobster-BBQ-celebration while jet planes perform aerobatics in the sky above the G7 resort!”

The teen activist’s post received overwhelming reaction from people around the world, who mocked the empty rhetoric of world leaders.

Climate activists around the world have been asking world leaders to discuss the link between animal agriculture and climate change on global platforms such as G7. According to the Journal of Ecological Society, animal agriculture is responsible for at least 87 percent of greenhouse gas emissions. It is also the single largest source of methane emissions.

The intensive animal agriculture or factory farming requires clearing of vast tracts of forest land to create pasture lands for livestock. This is not only causing widespread deforestation but is also leading to massive biodiversity loss.