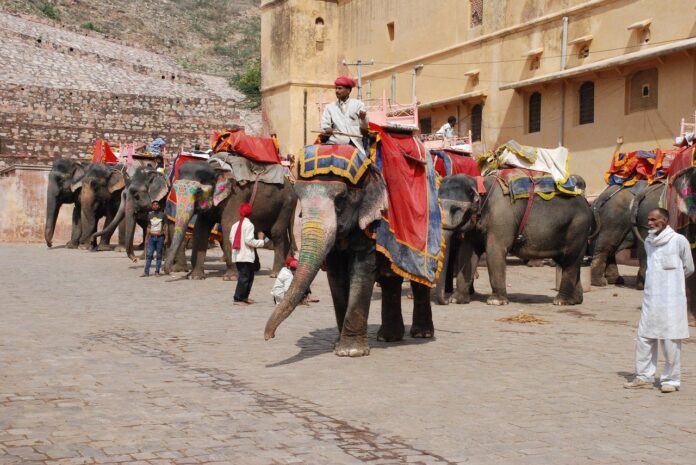 A new inspection report from the committee constituted by the Project Elephant Division of the Ministry of Environment, Forests & Climate Change seeks to phase out elephant rides by replacing them with electric or battery-operated vehicles at Amer Fort, citing aging elephants and tourists’ declining preference for elephant rides.

The committee’s recommendations include refraining from using elephants with irreparable eye problems for rides and banning any new additions of elephants for rides. The court’s order to appoint a committee was based on concerns about cruelty to elephants and apparently illegal use of them for rides and other activities at Amer Fort and Elephant Village in Jaipur. PETA India had acted as an intervener in the matter and the Wildlife Rescue and Rehabilitation Centre was the petitioner.

The committee’s report notes that of the 98 captive elephants inspected, 22 suffered from irreversible eye problems and 42 had foot problems, including overgrown nails and flat footpads from walking on concrete roads. Three elephants who tested positive for tuberculosis (TB) – a potentially fatal zoonotic disease of public health concern – in tests carried out by the committee had also been found to be reactive for TB in tests conducted by the Animal Welfare Board of India (AWBI) in 2018, thereby refuting the claims made by the Rajasthan Forest Department that no elephants in the state had TB. The committee recommended in its report that elephants and mahouts be screened for TB twice a year.

PETA India notes that a previous AWBI inspection report on captive elephants in Jaipur revealed numerous apparent violations of the Wildlife (Protection) Act, 1972. Many elephants displayed stereotypical behaviour patterns indicating severe mental anguish, such as repetitive swaying and head-bobbing, and all those examined were seen carrying loads heavier than 200 kilograms, which is the legal maximum for elephants on hilly terrain such as that at Amer Fort.