A computer engineer from Manipal University, Prakarshi Pulkit realised early on that he will end up being a mediocre engineer if he continues to tread on the same path. He decided to change tracks and took the courageous decision to follow his passion and joined a culinary school without telling his parents. He passed with flying colours and got selected into ITC Hotels’ management training programme.

Speaking to The Vegan Indians, Prakarshi, Co-Founder, PlantMade, said, “I spent seven years working with ITC hotels, where I opened a few five star hotels and some restaurants. Apart from that, in my free time, I used to help other people open small food businesses – from a thela selling chaat to bakeries to pizzerias and even full scale restaurants. During this time, I also tried my hand at entrepreneurship but could not juggle too many things at the same time. However, it helped in my personal growth and I learnt a lot.”

Prakarshi moved to Goa sometime later, and about a year and a half back, developed keen interest in cell-based and plant-based meat segments. “I started reading about all big names in the industry that had started to gain momentum. I started researching on this space and reaching out to entrepreneurs, who helped me in this journey by providing insights and sharing their experiences. Around the same time, I came across an article on Professor Kavya Dashora from IIT-Delhi, and I reached out to her. I told her how I had been working with plant-based meat in my kitchen and that I would love to talk with her about it. She invited me to IIT, where I got introduced to Rahul who had funded the research there through his company Four Pursuits Venture.”

“Rahul’s mission was to support businesses and incubate research that had a significant social impact. This was his way of giving back to the community. He had funded two researches, one of which was on plant-based meat alternatives,” said Prakarshi.

Till December 2019, all research and development was done under Four Pursuits banner, in collaboration with IIT-Delhi. In January 2020, Prakarshi and Rahul formed a new company called Dharmic Foods Pvt. Ltd. that now owns and operates the brand PlantMade.

An Egg Made From Plants 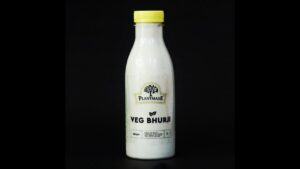 Prakarshi wanted to enter the alternative meat space but was undecided on whether to choose plant-based or cell-based. “I ideally wanted to be in the cell-based space but after researching, I realised two things – one, that it is a very capital intensive affair, and two, India is atleast 10 years away from the time when such meat can be commercialised. There is still a lot of time before we are able to make large bio-reactors that are able to cater to India’s huge population.”

“I realised that if I want to be in this space, plant-based is the way forward!” he exclaimed.

Giving his views, Prakarshi said that the plant-based market is still not fully evolved and sometimes it becomes difficult to sell a product. He faced a similar situation with his plant-based egg. “We have to first explain to the consumer as to why they should not eat an egg, and then convince them to try a product that can replace their egg.”

But is PlantMade Veg Bhurji an exact replica of a natural egg? Prakarshi commented, “To be honest, it is not 100% like an egg but people are pleasantly surprised by its taste. It gives the idea of an egg but does not give out the strong smell that we associate with the latter. It offers the same functionality. For example, one can use our egg to make brownies, French toast, kathi rolls and pancakes. We are suggesting people to try it as it is a more sustainable option as compared to egg.”

Professor Kavya Dashora had recently bagged the first prize at Innovate4SDG contest organised by United Nations Development Program (UNDP) Accelerator Lab India for creating the mock egg that is now sold to consumers under PlantMade’s brand name. The mock egg has been termed as a perfect innovation by UNDP that could help meet the two targets of ‘zero hunger’ and ‘well being’ under Sustainable Development Goals (SDGs) 2030. 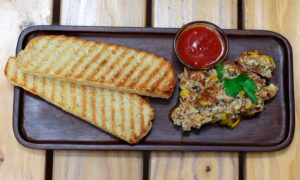 On what makes PlantMade egg different from other similar products in the market, Prakarshi said, “What other brands do is that they buy the isolate and other components of their formulation from different vendors. But we have a patentable technology that has allowed us to not depend on someone else’s raw materials. We are able to extract our own proteins through a much simpler, yet ingenious method of extracting protein from the grain itself. Instead of buying powders and reconstituting them, we buy the dal and chana, and extract protein directly from them. That is the main differentiating factor.”

The company formally started commercial operations in January last year and had plans to launch its products in April. However, due to the lockdown, it was finally able to roll out only in September. Prakarshi told us that it was his job to get the product to the market. Initially, they had to struggle a lot as they did not have specific machines for different processes. “We spent a lot of time in getting customised machines built and getting processes perfected. We had hoped that we will restrict our market to only Delhi-NCR. In the first month, we received about 45 orders without spending a penny on marketing or distribution. Over the month, we realised that we are getting maximum interest from Bengaluru, Hyderabad and Mumbai, and therefore, we decided that we will form strategic partnerships with like-minded people in these cities to cater to customers there.”

“We want to create our own consumer base but we have been struggling to get on to Amazon, BigBasket and MilkBasket. We have now shifted our focus on building our own direct to consumer channel. We are a small company without any funding, and we are desperate to reach a point where we can sustain all our costs so that we can expand to more cities by setting up production units there.”

Prakarshi told us that they have received a lot of interest from five star hotels and large institutional caterings, but cost and convenience factors made them shy away from it. “We realised that their requirement is different, and to meet that, we are developing an alternative which I feel is a much smarter solution. Firstly, it is going to be in a powdered form so we will save on cold shipping, cold logistics and spoilage. Secondly, we are going to save cost by reducing the weight of transportation. Thirdly, hotels can meet any number of orders just by mixing the egg with water and oil, and leaving it aside for half an hour. We are reworking on the format and we will be launching it formally by end of January.”

Since vegan egg is a completely new category, it becomes difficult to convince people to try the product. Therefore, PlantMade is now looking at entering into existing plant-based food categories in order to create brand awareness amongst customers who are already using such products. 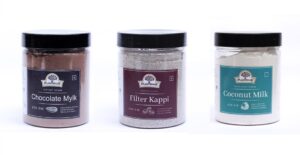 According to Prakarshi, “That will help us leverage brand loyalty to make people try our plant-based egg. We have started getting into a few mainstream segments like peanut butter, almond butter, dips, spreads, and beverages. We want to offer products with limited ingredients without any sugar or taste enhancers. We want to do a line of beverages suited different palates. We are also going to launch a vegan cream alternative that could be used in tea, dal makhni, etc. It will be a vegan cholesterol-free alternative to cream. Our focus is on cholesterol-free, high protein products.”

Are Processed Alternatives Safe for Consumers?

Prakarshi is of the opinion, “With every food, the key is moderation. Whether you eat a natural egg or PlantMade egg, they are all good till they are eaten in moderation. It is true that these are processed foods, but we are catering to a very evolved consumer who reads the label and understands everything that goes on the label. Responsible companies like ours want to offer food that is good for nutrition and environment. It is adding value despite the processing that goes into making it. We are trying to make things more efficient. For example, the amount of water used to get one egg is significantly lower when you use a plant-based alternative.”

“Although it might be processed but one must understand what ingredients go into making plant-based egg. If the process is corrosive or toxic on the verge of being artificial, then we should definitely avoid trying such a food. We as a company might compromise on price, texture or taste, but we will never compromise on nutrition and functionality aspects of using processed ingredients like isolates and gelling agents. We make sure that at every stage we are conscious of the impact our food is making on health and environment,” concluded Prakarshi.

Animals Are Banking on Us and We Can’t Fail Them: GoodDot CEO

Japan’s ‘Next Meats’ Comes to India, to Set up Manufacturing Plant