The recently-released documentary Seaspiracy has aroused the conscience of millions of people around the world. Besides throwing light on some hard-to-digest facts, it has also successfully initiated discussion on the state of our oceans and marine life. Several celebrities have spoken and written about the revolutionary film and this has led to more people watching it. Popular celebs like Kourtney Kardashian, Zach Braff, Florence Pugh, and Bryan Adams, have expressed their views on the Ali Tabrizi directed documentary through different platforms.

In India also, we have seen a reaction from a few leading actors, such as Bhumi Pednekar, Kajal Aggarwal, and Samantha Akkineni. Bhumi, who is extremely passionate about environment, shared a story on her Instagram handle urging fans to watch the documentary on Netflix. “Please please watch this,” she wrote. The talented actor, who is known for doing offbeat fims, has always been vocal on environmental and social issues. She also launched the ‘Climate Warrior’ initiative with an aim to work towards combating climate change. 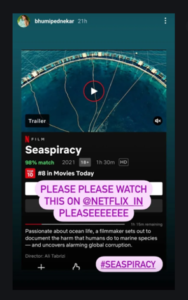 Kajal Aggarwal also expressed her shock after watching the film and penned down a long Instagram story. She wrote, “I must admit it is heartbreaking from plastic to slavery, bycatch of dolphins for the sake of pest control to the laughter of whales and bluefin tuna, it’s appalling how fish industries are given such liberties and nobody raises a voice or questions them? There are no laws or government control on whatever happens in deep oceans. It is very important to know how your seafood is caught- there is an entire syndicate, a mafia that steals almost extinct species of fish from off access fish.” 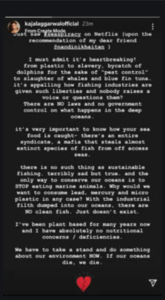 She continued, “There is no such thing as sustainable fishing. Terribly sad but true. And the only way to conserve our oceans is to STOP eating marine animals. Why should we want to consume lead, mercury, and microplastic in any case? With the industrial filth dumped into our oceans, there are No clean fish. Just doesn’t exist.”

Kajal has often posted about how she prefers eating plant-based foods. In her post, she added, “I have been plant-based for many years now and I have absolutely no nutritional concerns/deficiencies. We have to take a stand and do something about our environment NOW. If our oceans die, we die.”

Samantha Akkineni, who has established her name in the Telugu and Tamil film industries, and is a recipient of four Filmfare Awards, also shared her thoughts on the film. She said that she felt sick after watching the film and knowing about everything that goes behind catching sea food. She wrote on her Instagram post, “I feel ashamed that I used to eat tuna… feeling sick while watching this.” 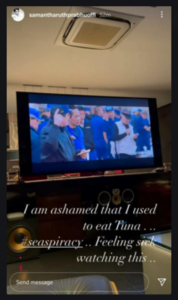 Seaspiracy released on March 24, 2021 on Netflix. The documentary focuses on the impact of commercial fishing on marine environment. It throws light on the unsustainability of large scale fishing and shows how commercial fishing is destroying marine ecosystem.