Leading Hollywood actor and environmentalist Leonardo DiCaprio took to the social media on Thursday to tell his 37.5 million followers on Twitter and Facebook to reduce their meat intake to prevent climate change. In his post, he said, “Every single person can help the planet and reduce climate change with one small choice every week.”

He also posted a picture with the caption, “If every person in the US replaced just one beef burger per week with a plant-based Beyond Burger. It would be the equivalent of taking 12 million cars off the road.” 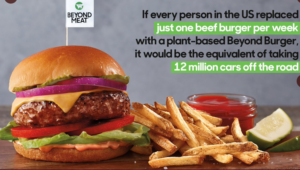 “Join me and @BeyondMeat in our mission to rethink the future of food,” he added.

Last year, ‘The Wolf of Wall Street’ actor posted on his social media that “animals are worth more alive”, and called for an end to the wildlife trade.

Leonardo DiCaprio has been a strong advocate for environment protection and is one of the few celebrities of his stature to work actively in the climate change movement. He also established the Leonardo DiCaprio Foundation in 1998, a non-profit organisation devoted to promoting environmental awareness.