Vegan footwear excludes the usage of animal products such as leather, wool, fur, glues, etc. and is completely manufactured from eco-friendly materials. Certain factors such as surge in vegan population, growth in demand for sustainable products, rise in concerns regarding plastic wastes, increase in awareness regarding animal rights, and others have significantly boosted the demand for vegan footwear around the world recently.

Furthermore, vegan footwear can often end up being less expensive than the animal based footwear. Also, vegan leather is versatile and often bio-degradable. It is said to leave a smaller carbon footprint as compared to original leather and synthetic leather, and are thus considered more environment friendly. The exploitation of exotic animals for their skins and brutality associated with the animal by-products are the major concerns with the animal based footwear. Because of these reasons, vegan footwear has become hugely acceptable in the fashion world.

According to a report published by Allied Market Research, the global vegan footwear market size is anticipated to reach $300.1 billion with a significant CAGR from 2021 to 2030. North America is currently holding the highest market share and is expected to grow at the fastest CAGR during the forecast period. 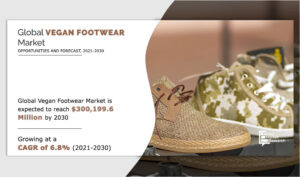 However, the outbreak of the COVID-19 pandemic led to a global lockdown, due to which, the production facilities of vegan leather were completely closed, especially in the initial period. The implementation of travel and transport restrictions during the pandemic caused disruptions in the supply chain, which in turn, led to unavailability of raw materials. Also, lack of labor force caused challenges in the production hubs of vegan footwear. Temporary closure of retail shops, at the same time, gave way to reduction of footwear sales. There was a significant declined in need for footwear among consumers, as they were mostly in their homes in order to maintain social distancing norms. These factors hampered the growth of the global vegan footwear market to some extent.

Nevertheless, the continuous rise in vegan population across developed economies such as North America and Europe is driving the growth of the vegan footwear market.

In addition, a few more factors such as continuous growth in veganism, and rise in initiatives on animal rights and animal abuse by NGOs are boosting the growth of the market even more. Fortunately, the varieties in vegan footwear have also become better over the years. With this drift on board, the vegan community is likely to grow into large numbers and likewise, the global vegan footwear market is expected to have exponential growth in the near future.