Humane Society International (HIS)/India, one of India’s largest animal protection organisations, had recently announced that it has partnered ProVeg Incubator for its Humane Entrepreneurship Program. ProVeg is a leading incubator for plant-based and cultured food startups. HIS says that with this collaboration, they aim to harness innovation and create a sustainable future, while meeting the surge in demand for humane alternatives for food. To know more about this partnership and discuss other issues, The Vegan Indians caught up with Alokparna Sengupta, Managing Director at Humane Society International India. Here are the excerpts from the interview:

We have had a plant-based outreach programme for a long time. Over the past eight years, we have been reaching out to students in colleges, telling them where their food comes from by showing them the reality behind their milk, eggs or paneer. Then, a couple of years ago, we started approaching institutions to try and bring about an institutional change because we feel individual behaviour is unpredictable. Institutional change is a good way of measuring the impact of human behaviour change. During the same time, a lot of startups started coming to us, requesting us to connect them to retailers, corporates and other stakeholders. That was when we decided to come up with our Humane Entrepreneurship Program. It is a mentorship program, something similar to an incubator. We support startups for a duration of six to eight months and connect them to players in the global and Indian ecosystem, investors, as well as people who are curious about the vegan industry in India. For the same, we are collaborating with ProVeg, which is helping us in our Humane Entrepreneurship Program.

What kind of synergies have you identified in this collaboration? What are the main areas that you are going to focus on?

ProVeg is looking at it from an international, or if I may say, a European point of view as most of their experts are from Germany, Belgium and other European countries. So, what we are trying to do is see how we can use their expertise and build something in India. That’s the kind of synergy we are looking at! Their expertise can help Indian entrepreneurs to expand their horizons, look for global trade and get trained under or incubated under their guidance. 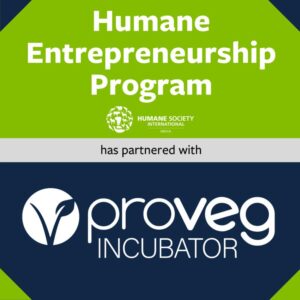 Do you think the plant-based ecosystem is mature enough in India? If not, what immediate steps should be taken to help it evolve faster?

Within two years, we have seen a lot of improvement in the ecosystem here, but it is not fully evolved. I would say, it is still in an evolving space and it is incrementally growing. For example, there were just two to five companies, who were doing plant-based meat or milk in 2018, but now, the number has grown to 25-30, which is a good increase. I think one obstacle to the growth in this segment is the common perception that India is not a big market because there is a myth that India is a vegetarian country. Although India has the maximum number of vegetarians, it still is only 30%. The remaining are non-vegetarians and 70% of 1.3 billion people is a big number! Whether it is chickens, fish, eggs, milk or leather, India is one of the largest producers. So, that sort of communication with investors has been going on through our program too. Our cohort is becoming very popular and one of the members from our first cohort has actually got into ProVeg Incubator. Indian investors, who were only interested in e-commerce space, are now interested in being a part of our investor panel and are very curious about this space. These are the people with real power and money in the Indian startup ecosystem, so that an improvement for sure.

Plant-based meat and dairy alternatives are still at a very nascent stage in India. Do you think the backlash faced by manufacturers of such products from established giants like Amul might hamper the growth of this segment? How should the industry tackle such backlash?

I think the regulators have to be fair, but unfortunately, there is some sort of a regulatory capture, otherwise how one Amul’s complaint can alter regulations completely. The only reason they might be targeting such a small industry is because they can see that it is growing, and also that similar regulations are brewing in Europe and the US. If the government is promoting startups and ease of doing business, then it must encourage players in this segment too, not just those on the orthodox side.

How can the plant-based and cell-based segments be brought into mainstream?

What can be done is facilitating more interaction between investors in India and those abroad. We are helping people achieve something, but are we getting new products into the market? Probably not! So, in terms of plant-based meat, fermented meat and seafood, we are still at a nascent stage, but we have the brains. What we need are infrastructure, investment and subsidies that other industries get. If the plant-based or cell-based industries start getting even a fraction of what other industries are getting, it will really help.

Why doesn’t India have proper data on animal exploitation and animal agriculture?

We get the numbers from the animal husbandry department, National Survey Schemes and other such sources. The numbers are there; what we don’t have is enough research and data backed by scientific minds. In India, it is always seen from a point of view of productivity and animal husbandry rather than from animal welfare point of view. Animal welfare has never been considered in animal agriculture because we are trying to increase production and exports. That is why, we don’t have data, but we have pictures and numbers. The dairy industry in India is very different from that in other countries but that doesn’t mean they are treated well. A lot of people think that cows are worshipped and they are even treated better than women! But that is completely untrue. These are the same cows who are later slaughtered for their leather and no one even talks about the cruelty towards buffaloes. Rather than only the dairy industry, we have to look at the entire picture because we cannot be protecting cows when we are increasing leather production.

What will be Humane Society International’s focus in coming months?

In February, our first cohort of Human Entrepreneurship Program is going to culminate. We have a mix of Indian and foreign investors who are interested in India, and we have about five cohort members who are now going to pitch for their company. Post that, we will start planning for our second cohort. In the meantime, we are thinking of showcasing all the plant-based and fermented non-animal foods in the country, and trying to see if we can have provide a platform, where the end users can come and test them. We will also continue our corporate outreach program where we are trying to help them replace animal products in the menu by 20-30 percent. There are four restaurants that have already made commitments towards sustainability and are actually replacing animal-based food products in their menu to fully plant-based.