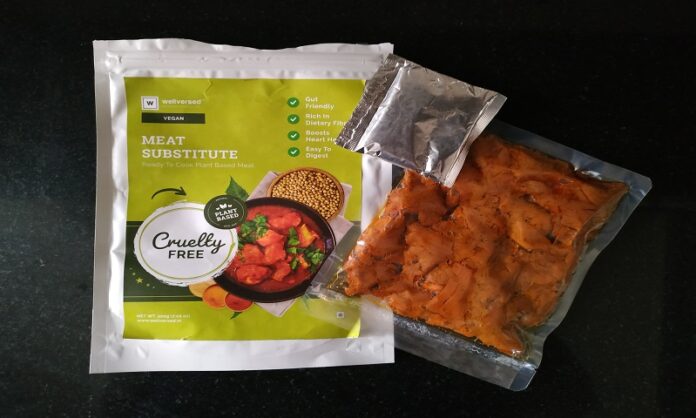 Wellversed Meat Substitute is a ready to cook plant-based vegan meat alternative. It is made of ingredients such as soya protein, wheat flour, wheat protein (gluten), rice, corn starch, vegetable oil, spices and condiments. The vegan meat comes in bite sized pieces and can be added to a variety of Indian, Italian and other cuisines. It can be added to gravy, biryani, pasta, pizza, sandwiches, burgers, amongst various other items. It comes with a masala sachet that can be used in gravy dishes.

We made an Indian-style gravy and added the pieces of Wellversed Meat Substitute in it. We also added half the masala sachet provided in the pack. The outcome was delicious and the vegan meat pieces were able to absorb the flavours of the gravy. We realised that this meat substitute came out more tender than the regular soy-only meat versions. 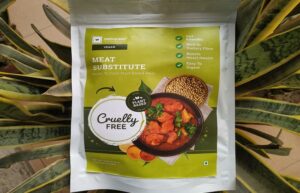 We asked a non-vegetarian to try it out as we wanted to understand how closely it resembles the taste and texture of animal meat. According to him, it tasted good but there was scope for improvement in both taste and texture. So, it might not be the ideal meat substitute.

Another thing that might not go in favour of Wellversed Meat Substitute is its price. A 200 gms pack comes at a price of Rs 399, which is a bit expensive if we compare it to other soy meat alternatives available in the market. We hope the company relooks at its pricing to make it more affordable for people who want to try out new mock meat options.

Overall Rating: 3 out of 5 stars