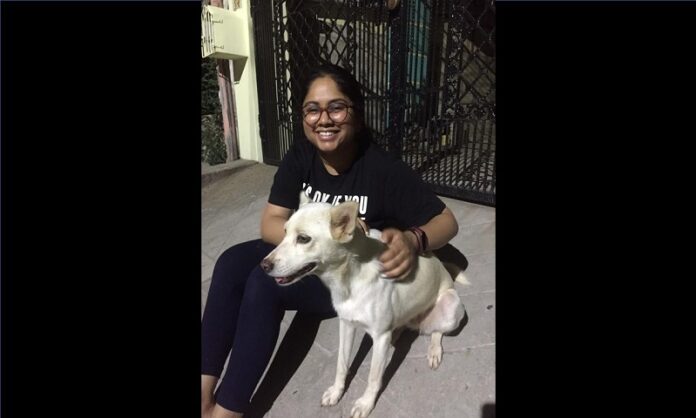 A vegetarian since childhood, Vyshnavi got her first taste of chicken during a school trip when she was in class 9. “I instantly fell in love with it,” she exclaimed while speaking to ‘The Vegan Indians’.  However, things changed when she met a friend in college who happened to be a vegan. “She told me everything about veganism; I kept thinking about it but did not go vegan immediately. During that time, I came across a video on losing weight with a vegan diet on Youtube, and I thought to give it a try. I went vegan for 28 days and lost quite a lot of weight. I felt much better in terms of health, and that was when I decided to go completely vegan,” said Vyshnavi. According to her, health factor motivated her to try veganism but later ethical and environmental concerns too jumped in, making her resolve even more firm.

Speaking on the difficulties she faced during this journey towards veganism, Vyshnavi pointed out that the single biggest problem that she has faced is trolling. “Its super easy to buy things, it is super easy to make your own things, the problem is the trolls that you have to deal with. Your cousin trolls you when you don’t eat paneer on family functions, your friends troll you for not eating chicken. It’s how people make you feel when you go vegan. It’s not about the availability or price of products. That has never been a problem. Dealing with trolls online and in real life is the biggest issue I face.”

When we asked her, what could be the reason behind this mindset, Vyshnavi said, “I think this must be very controversial to say but I feel that people associate violence with strength and compassion with weakness. If I say that I am not going to hurt any animal, I am seen as a weak person. There must be other factors but this I think is a big reason. For example, we often hear people saying that boys don’t cry. We have this misconception that being emotional or compassionate is a sign of weakness. This needs to change.”

Vyshnavi’s parents are vegetarians but they support her vegan lifestyle in every possible way. “My parents have always been vegetarians for spiritual reasons. It would be great if they turn vegan but it will be difficult for them as they are used to consuming milk all their lives. They don’t eat meat, which is a big thing. However, they support me unconditionally. My mom makes sweets with coconut milk instead of ghee and customises things as per my requirements.”

Being a vegan and minimalism influencer, she gets a lot of queries. Vegan-curious followers ask her questions about this lifestyle. But again, what fellow vegans share with her the most is their concern on trolling. “Most people that I have come across face the same issue as I do, that is, the trolls they have to deal with. Honestly, once people decide, they go vegan very easily but whenever they share it on social media, they start getting trolled.”

According to Vyshnavi, veganism is getting very popular in India now. “There are a lot of brands that are coming up with vegan products; Youtubers have a lot of vegan content to share. Information on veganism has become very accessible for everyone.”

Being a Vegan Isn’t Expensive!

Veganism is often misconstrued as an elite lifestyle, especially since it is advocated by celebrities, artists and activists. Commenting on this view, Vyshnavi said, “Chicken costs you about Rs. 150-200 per kg but chickpea costs 1/4th of what chicken costs. Tofu too is cheaper than paneer. Our regular diet that includes dal, rice, wheat and vegetables, is by nature vegan. It is fine if you cannot afford almond milk or soy milk; you can easily make it at home at one-tenth of the cost. I make my own soy milk, almond milk and yoghurt at home. Therefore, saying that being vegan is a privilege is not right.”

Vyshnavi feels that going vegan should not be seen as a privilege as anybody can turn vegan. She advises aspiring vegans to take it slow. “One does not need a lot of money to turn vegan. If you decide to go vegan, you can do it as soon as you want. You can just start by quitting morning milk intake. If you really cannot quit milk or meat, at least reduce the consumption. That way you will be able to make an impact on your health and environment in the long run. Watch documentaries such as ‘What the Health’, ‘Cowspiracy’ and ‘Dominion’ to educate yourself,” she concludes.