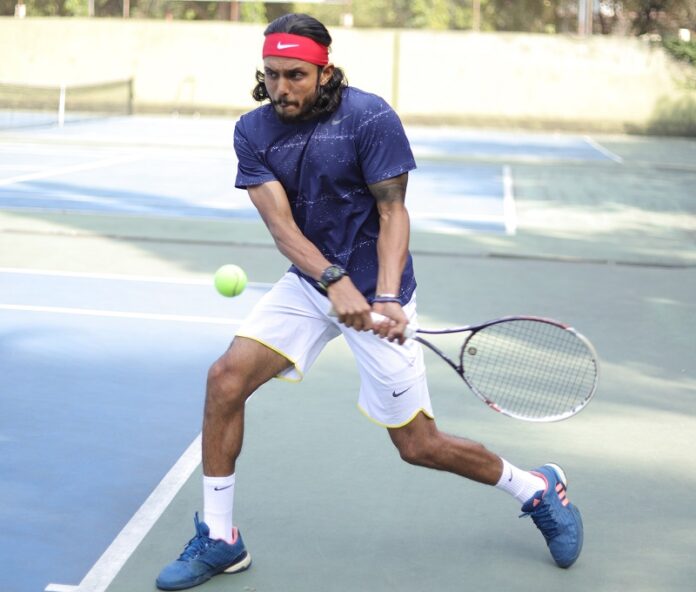 Hard work, determination and commitment are the prerequisites for success in a sporting career. Besides this, a sportsperson’s physical fitness and nutritional intake are crucial for injury-free long-term performance. Vishwajeet Sangle, India’s only vegan professional tennis player, knows it well. Having made India proud on several occasions, Vishwajeet holds 11 titles and has played over 90 tournaments since 2010. He has been on a winning streak since 2014 and is also the youngest player to win Cany-Barville, holding on to the title since 2018.

To know more about Vishwajeet’s life, especially his vegan journey, The Vegan Indians caught up with him recently. Here are the excerpts from the interview:

When did you start playing Tennis and who inspired you to play this sport?

I was born in Satara, a small town in Maharashtra, where I used to live with my grandmother. Sports activities in Satara were scarce. As a kid, I was never keen on playing tennis, but after watching Rafael Nadal on TV, I was awestruck by his personality which ignited the passion for Tennis in me and I went on to choose it as a profession. Even without any professional coaching, I managed to secure more than 11 titles!

Do you think Tennis as a profession has evolved in India? What kind of challenges did you face over the years?

Slowly and gradually things are changing in India but there are no noticeable developments in small towns. In Satara, where I come from, there are a few people inclined towards sports. When I was a kid, my parents and my brother shifted to Mumbai due to my brother’s medical issues but I stayed in Satara with my grandmother. When I was nine or 10 years old, I joined a Tennis summer camp in Mumbai where I was exposed to professional warm up routines, drills, etc.

When I returned to Satara, I realised the lack of professionalism in my everyday routine and asked my father to buy me a racket. At that time these professional rackets used to cost around ₹20,000, but my father bought me a racket worth ₹800, which I still have in my possession, plus three Wilson Tennis balls. At that time, I felt like a pro with all the professional equipment. Then I started following the exact summer camp’s routine with warm ups and set targets for myself.

During the second year of my summer camp, when I was 11 years old, I came across a local tournament in Mumbai where I lost in the semi-finals. I regained my confidence realising that it was my first tournament and I still made till semi-finals, which means I can do something in this field.

You are a plant-based tennis professional. Why did you adopt this diet?

There are many myths associated with veganism like people cannot play well after turning vegan or they cannot indulge in highly energetic activities. I think the lack of knowledge creates these myths as people don’t know about the right substitutes for meat or dairy. Our upbringing also plays a role in it because we have been taught that if you want to build muscle or want to run fast, consume meat and dairy products. The branding and advertising of such products is very powerful and influential.

Before my international debut, I used to eat a lot of chicken. One day I witnessed a chicken being butchered and it startled me. That day I decided to become a vegetarian. After that, I went to Kazakhstan to play my first junior tournament where I was diagnosed with lactose intolerance. I slowly started cutting dairy products out of my diet and realised that it was having a positive impact on my lifestyle. At the time, I was still not aware of the term ‘veganism’. At the age of 18, I was approached by a vegan brand to endorse it and that was when I realised that my diet had a name.

Have you ever faced resistance while following a plant-based diet?

My entire coaching team has always been supportive of me. When I met my international coach, who has been traveling with me for the past four years now, I got to know that he and his entire family are vegan. He has inspired me a lot and introduced me to different kinds of plant-based protein sources. So, gradually I understood what works for my body.

Since you have come a long way and achieved so much in sports, how do you plan on encouraging youngsters to choose sports as their career option in future?

We do not have a sports culture in India and tennis is an expensive sport. Coming from a middle-class family, I was always short of money to pay to the coaches, so I took odd jobs to save up for my coaching fees. After building a successful career in sports, I decided to do something for other aspiring kids and started my own venture named ‘Esperer’ (which means hope in French). Currently, we are managing 22 athletes and 70% of them are playing in Asian Games this time.

What tips would you like to give to youngsters who want to enter the realm of sports on plant-based diet?

I would say don’t follow any celebrity diet plans because these plans are not sustainable. Moreover, they are not financially feasible. Eat regular food which is locally available. Now is the right age to start with whatever you have been planning.