One billion plastic straws are used and thrown away every single day globally. This often-disregarded fact was enough to seed an idea in Divya Mohan’s mind, who ended up developing a 100% plant-based, edible straw that might prove to be an answer to the single-use plastic menace around the world.

Speaking to The Vegan Indians, Divya, who is the founder and CEO at Ooble, said, “During our research for a project at Lund University in Sweden, we stumbled upon some numbers that gave us an idea about the colossal waste generated by plastic straws around the world; we wondered how such a small entity is making such a big impact. Being small in size, recycling plastic straws becomes difficult, and they end up contaminating landfills and oceans.”

“We also realised that alternatives available in the market are either not functional, as they become soggy within 5-10 minutes, or had to be washed and reused. Given how intimately we use a straw, there was a need for an alternative that is not only functional but also hygienic,” she added. 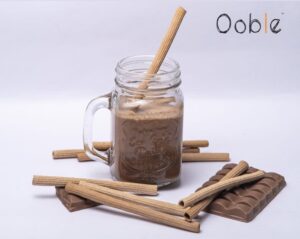 The team undertook a design thinking approach, and arrived at an idea of a straw that can be eaten. They believed that such a straw will not only be sustainable since the user will end up consuming it, literally becoming the decomposer, but will also be hygienic as it is single-use. “It will be a convenient option as all you have to do is sip, gulp, and munch!” Divya exclaimed.

The idea of edible straw was conceived towards the end of 2016 when there was not much discussion on finding alternatives to this problem. According to Divya, she was not able to take this idea off her head, and was busy making several prototypes at home. “The product required to be sturdy enough to remain intact in liquids as you sip on it, while also having the right texture so that the user enjoys the experience of biting into it. After several prototypes that failed miserably, we finally created Ooble – the very first vegan edible straw!”

Over the years, Divya and her team funded the development of Ooble through innovation grants and competitions, and this is when the viability of the idea became clearer. “We had absolutely no clue what entrepreneurship or running a start-up meant, but we received immense support from organisations like Climate-KIC, Venture Lab, and Thought for Food, who gave me a platform to establish Ooble as a brand.” 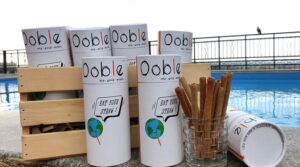 Ooble straws are 100% plant-based, and Divya said that they are sturdy enough to remain intact in beverages for over 30 minutes. The company has carried out multiple focus-group tests evaluating the taste and the use-case to ensure optimal results. Divya said, “In the core team, Jitesh Jayakumar (Head of R&D at Ooble) and I have our competencies in product development and innovation. We keep sustainability at the core of our business model, so we don’t just deliver a sustainable end-product but improve our carbon footprint throughout the supply-chain.”

Ooble is currently available in Chocolate and Cinnamon flavours, and is going to introduce more flavours soon. Priced at Rs 560 for a box of 30 straws, they are available at the Bare Necessities Zero Waste Solutions website in India. Besides India, Ooble straws are available in Europe and Australia. In Europe, the company is offering these straws at Thought for Food web-shop. It is also looking at tying up with cafés and restaurants.

With a manufacturing facility in Bengaluru at present, the company is looking at scaling up at other locations as well. It is also planning to expand its product range. Divya remarked, “The aim is to push our boundaries on how we define food and explore the gaps within the industry that can be ameliorated.”