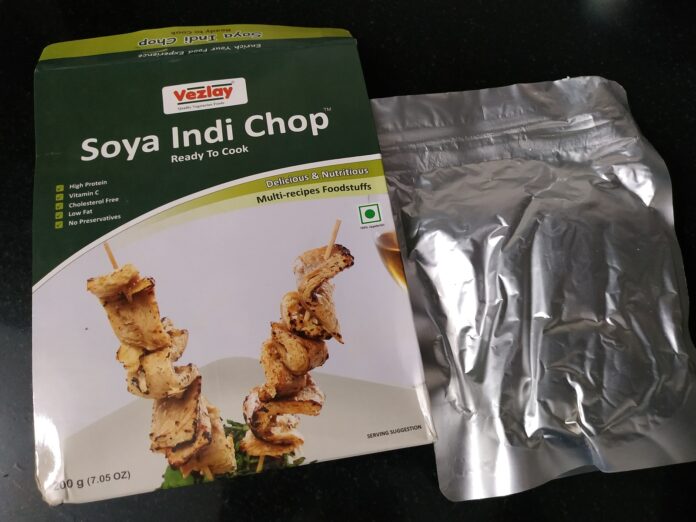 Soya Indi Chop is a vegan alternative to meat and is made from soya. Being extremely rich in protein, soya forms an important part of vegan diet and can help vegans raise their protein intake. According to the company website, the product is made from soya & natural ingredients.

We used 200 gms pack of Soya Indi Chops by Vezlay for our review. The contents are ready to cook and there are three ways to eat these mock meat soya chops. You can directly fry them, roast them after marination or use them in a gravy base. We tried both fried and marinated versions.

The chops resemble the texture of chicken and are a good substitute for those looking to adopt a vegan or vegetarian lifestyle. The chops come in thin strips, making it easier to cut and fry, unlike the loose chops we get in regular stores. We would recommend the marinated or gravy version as the directly fried ones came out really tasteless. Even after adding a lot of spices and even lemon, fried chops didn’t taste good, mainly because the spices only coated the chops from outside. They were completely uncooked from inside and tasted really bad.

The marinated version was much better as marination helped add flavour to soya and made it more moist from inside. We marinated them with a mixture of ginger garlic paste, garam masala, red chili powder, salt and lemon juice. After marination, we roasted them and added dry spice powder later.

Price: It is a little costlier than the chops available in the market. One 200 gms pack costs around Rs 90. However, if you don’t want to compromise on hygiene, then these are a good choice for you.

Overall Rating: 4 out of 5 stars